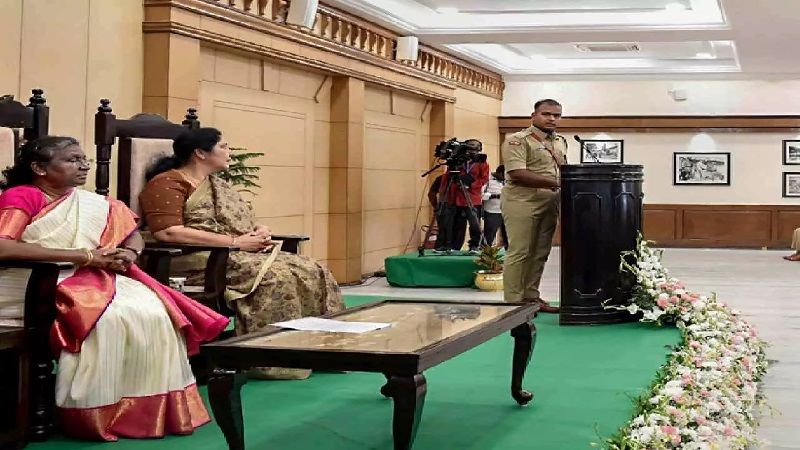 The President told the probationers of the Indian Police Service’s 74th Batch at the Sardar Vallabhbhai Patel National Police Academy, Hyderabad, that when the nation celebrates ‘Azadi ka Amrit Mahotsav’, it acknowledges the vast contribution our police force has made to sustaining and strengthening one of the largest and most vibrant democracies in the world.

Her remarks also pointed out that the Indian police have played a vital role in preserving the unity of the country. “Thousands of brave police personnel have laid down their lives for the cause of India’s internal security.”

She further stated that IPS probationers would hold leadership positions right from the start of their careers. “The quality of their leadership would determine the effectiveness and morale of the force led by them.”

President added that police forces have to be partners in the progress of the country and the transformation of the society. “Police officers are going to play the roles of change agents in India’s achieving greater prosperity while ensuring sustainable development, especially inclusion. Inclusion means – inclusion of that last person, the most deprived person, the most vulnerable person. That person should be at the centre of their concerns.”

She said that the officers have to be sensitive to the plight of the voiceless. “Police officers have to ensure that an illiterate poor man living in a remote corner of the country, gets sympathetic support at the local police post. The criminals should tremble with fear at the very thought of the police. But, at the same time, the common citizen should look at the police as a friend and saviour.”

President Murmu further said that in line with our stated national priorities, Nari Shakti has to play a major role in achieving the targets we have set for ourselves during the ‘Amrit Kaal’. “A truly ‘Atmanirbhar Bharat’, pre-supposes ‘Atmanirbhar Nari’. Larger participation of women results in better overall development. We should quickly move ahead from the phase of empowering women to the stage of women-led development.”

She urged lady police officers to always help other women, especially the vulnerable. “If every woman stands up for the weaker ones among them, the society would experience a great transformation.”