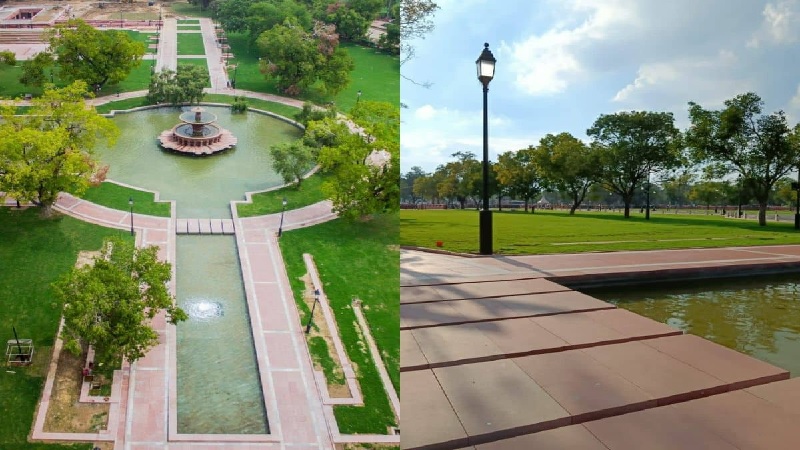 The revamped Central Vista Avenue is almost ready. Prime Minister Narendra Modi will inaugurate it on 8 September. The general public will have a glimpse of it from September 9. The area on either side of the Rajpath from India Gate to Rashtrapati Bhavan is called Central Vista. There are many government buildings in this area including Rashtrapati Bhavan, North Block, South Block, Rail Bhawan, Parliament House, Krishi Bhawan, Nirman Bhawan, Udyog Bhawan, Raksha Bhawan, National Museum, National Archives, Bikaner House, Hyderabad House. At present, only some parts are being opened to the general public, the rest will be opened after the reconstruction is completed.

The 3 km long Rajpath, now known as Kartavya Path, from Vijay Chowk to India Gate is all set to reopen after 19 months with modern facilities. India Gate, the most popular tourist attraction in Delhi, is about to get people back in a new avatar.

In view of the security of the PM, all the roads of India Gate and the roads around Rajpath will be completely closed. The traffic police said in its tweet that in view of the Prime Minister’s program, all the offices located around the Rajpath will be closed on August 8 at 2 pm. In order to handle the traffic in New Delhi, the traffic police has asked the central government to close the government office after 2 pm. With this, New Delhi will be declared a no flying zone for several hours. Drones and missiles will be deployed in Rashtrapati Bhavan for security.

People will get entry after 20 months

This project started in February 2021. It is being opened to the public after 20 months. People will not be allowed to go from India Gate to Man Singh Road on the day of the inauguration. They can, however, visit the rest of the area. The entire section will be opened to the public from September 9. The redeveloped area along the Rajpath will have food stalls, vending zones, parking lots, and round-the-clock security arrangements for all stakeholders. But food will not be allowed in the garden area from India Gate to Man Singh Road. India Gate will have two blocks and each block will have eight shops. Some states have shown interest in setting up their own food stalls. Ice cream carts will be allowed to operate only in the vending zones.

Parking space has been created for 1,125 vehicles along the entire stretch of Central Vista Avenue. Parking space for 35 buses has been made near India Gate. More than 900 new light poles have been installed. This project started in February 2021. Cultural programs will also be held on the occasion of the inauguration of Central Vista Avenue. A road of 16.5 km has been prepared for the walk of the people. Red stone has been used on this path. The roads are decorated with 974 light poles. 300 CCTVs have also been installed for security.