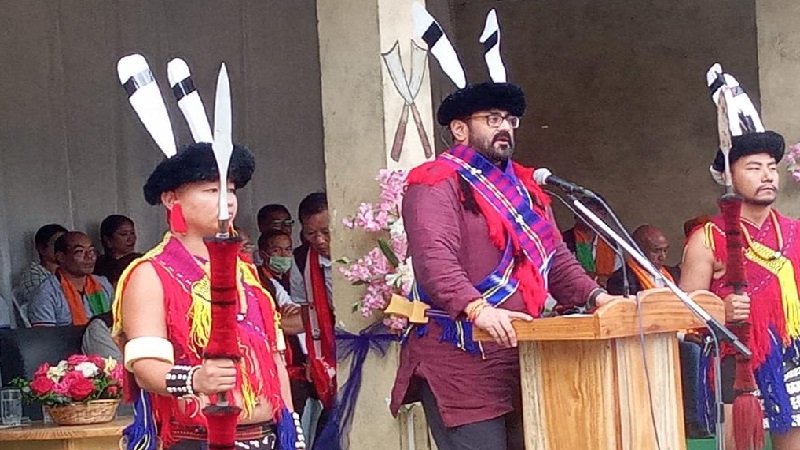 The Union Minister of State for Skill Development and Entrepreneurship, Rajeev Chandrasekhar on Monday visited Zunheboto, a small district town in Nagaland – becoming the first Union Minister to do so in a span of four decades. Chandrasekhar who is currently on a three-day tour of Nagaland, reached this hilly town, after a nine-hour journey by road from Dimapur.

The Minister met Zunheboto district administration officials and asked them to develop a district skill development plan that maps local aspirations and creates opportunities for jobs and entrepreneurships. “Our emphasis should be making optimum use of local resources and
reduce migration to urban centres,” he said.

The Minister also reviewed the implementation of Central government schemes and urged the functionaries to work zealously until the last mile is covered, every voice is heard and every grievance is addressed as envisioned by Prime Minister Narendra Modi.

Chandrasekhar also met beneficiaries of Central Government schemes at Zunheboto and Wokha who conveyed to him about how their lives had transformed for the better. “On such occasions, I feel truly proud and privileged to be a minister in the Modi government – playing a small role in his vision of transforming lives – SabkaSaath SabkaVishwas,” the Minister said in a tweet.

Chandrasekhar also held meetings with local Leaders and Karyakartas & shared with them the vision of PM for New India based on Sabka Saath Sabka Vikas Sabka Vishwas and Sabka Prasad.

Chandrasekhar later visited the Sumi Baptist Church in Zunheboto–known as the largest Baptist church in Asia–and offered his prayers.

Later in the afternoon, he left for Wokha, where he attended series of meetings with district officials, social workers, business community representatives, apart from the Elders of the Longsa Council Hall and functionaries of Lotha Hoho and Eloe Hoho organisations.